Harley-Davidson Embraces Its Tech Side 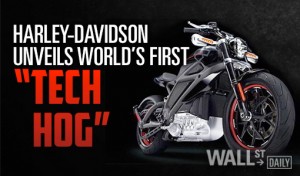 “You know… this may be more of a technology company than we think. It reads like a fantastic semiconductor company.”

The company he was referring to?

None other than Milwaukee’s motorcycle stalwart, Harley-Davidson (HOG).

Now, I’ve heard Harley-Davidson get called many things in my day… but a tech company? Not so much.

Is Cramer as mad as his Mad Money show? Or is there some truth to his claim?

Harley-Davidson Embraces Its Tech Side

As we’ve noted here many times before, the “connected car” trend is gaining some serious momentum, as in-car technology advances quickly.

From augmented reality, to infotainment systems, to driverless cars from the likes of Google (GOOGL) and Volvo (VOLVY), there’s no doubt that the auto industry is getting increasingly high tech.

Tesla (TSLA) is getting in on the act, too, with a driverless “autopilot” feature revealed in its Model D car.

But the conversation on automotive technology has always excluded motorcycles. That is, until Harley-Davidson launched a few projects it’s been working on…

With the introduction of Project LiveWire, Harley officially broke away from two century-old traditions at the company.

For starters, it’s the company’s first fully electric motorbike, with the company swapping its signature V-Twin engine for an electric motor. The 460-pound bike boasts 74 horsepower and can race from zero to 60 mph in under four seconds.

Second, it’s the first time that Harley has seriously looked to its customer base for feedback.

Keep in mind, Harley was one of only two American motorcycle manufacturers to survive the Great Depression. With such longevity and success, company executives have applied the motto, “We know what we’re doing,” and haven’t looked for outside help.

But the crippling recession a few years ago changed all that, and was reflected when Harley shares plummeted from $73.77 to $10.10 by February 1, 2009.

So Harley started listening more. And to help the company refocus, expand, and put itself in a better position to survive economic turmoil, CEO Keith Wandell decided to make a few innovative changes.

LiveWire is one of them. Take a closer look…